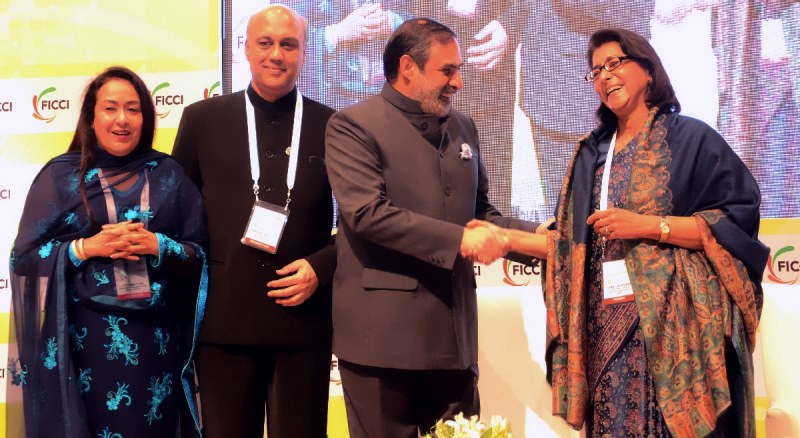 Anand Sharma on “….India on the move”

Shri Anand Sharma, Hon’ble Minister for Commerce and Industry, Government of India was the Chief Guest at our 86th AGM recently. In his Inaugural Address around our AGM’s theme – “…India on the move”, Minister Sharma highlighted the importance of government industry partnership in taking the country forward. He gave cognizance to the fact that the industry and the entrepreneurs that create wealth, and re-invest in the economy need to be actively engaged in this very different India.

We have been able to forge a very close understanding and an enriching partnership between the government and the industry. I feel, if India has to continue in its journey to move forward, to find its rightful place in the committee of nations, to ensure inclusive growth and sustainable development, Government – industry partnership has to be strengthened.. – Anand Sharma, Hon’ble Minister, Government of India

India in the knowledge era

Shri Anand Sharma also highlighted that India has connected very well with the information age and the knowledge era because of the Indian mind and the newfound confidence of Indian entrepreneurs.

We are not excluded, but we are participant and we are co-authors of the new story being written on global growth. We are jointly addressing the challenges that the world faces.

Shri Anand Sharma opined that India has written so much growth that developed countries could only achieve in a decade. Developed nations have never seen doubling of growth within a decade. India and China have demonstrated the fastest doubling of national income in the history of economic growth and development since the industrial age. However, since 2010, there is so much gloom and the narrative has gone so shrill that it started being termed as policy paralysis. Minister Sharma acknowledged that while the country wasn’t growing at 9% per annum, we did show resilience.

Where is the paralysis? I can emphatically say that in India there never has been any policy paralysis. Major decisions were made during this difficult period ever since the economic crisis engulfed the world..

Shri Sharma announced that Amritsar – Delhi – Kolkata Industrial Corridor project will be posed to the Union Cabinet soon for approval. The structural and financing arrangements required to operationalize the project have been tied up with the Japanese Government. The Amritsar – Kolkata Industrial Corridor is patterned on the Delhi-Mumbai Industrial Corridor (DMIC).  The Corridor will use the Eastern dedicated Freight Corridor as the backbone. The Eastern DFC extends from Ludhiana in Punjab to Dankuni near Kolkata. It will also leverage the Inland Waterway System being developed along National Waterway – 1 which extends from Allahabad to Haldia. The project will cover the states of Punjab, Haryana, Uttar Pradesh, Uttarakhand, Bihar, Jharkhand and West Bengal – a region which needs a major push for industrialization and job-creation.

Additionally, the Bengaluru-Mumbai Economic Corridor (BMEC) Project is on course with the DMIDC seeking international bids (Request for Qualification (RfQ)-cum-Request for Proposal (RfP)) for selection of consultant for preparation of a perspective plan for the project. The United Kingdom is strongly supporting the project.

Through these projects, India will in the opinion of Shri Sharma will draw large amount of investments from industrialized nations and will give the much-needed boost to manufacturing sector in India